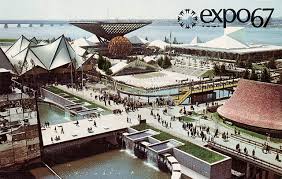 Expo 1967 introduced Canada to the 50 million visitors who came to Expo 67!

Six months and two days to discover “Man and His World” (the Expo 67 theme), which consisted of 90 pavilions from 60 countries (including the USSR) and theme pavilions such as “Man the Explorer” and “Man the Provider.”

Our country was front and centre at the world fair, with a Canadian pavilion as well as ones from Quebec, Ontario, Western Canada and the Atlantic Provinces, all welcoming the world.

The NFB was also there from the beginning, shooting documentaries on the entire experience and offering visitors a special treat: a giant-screen exhibit known as The Labyrinth.  The NFB has put together a playlist of six films to help you discover (or re-discover) this unique event.  We hope you enjoy this 6 part series! 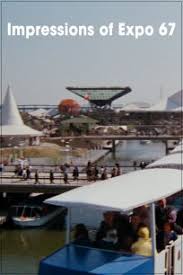 “An eight-minute wordless trip through Expo 67 replete with groovy 1960s music! You will see the USSR’s pavilion, the Monorail, Habitat 67, the American pavilion, a hovercraft, the Katimavik, and some creepy clowns. A perfect way to get a feel for what Expo was all about. The nostalgia factor is through the roof.” – A. Ohayon 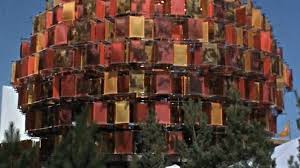 “A terrific look at the Canadian pavilion, including the unforgettable attraction called the People Tree. I was very happy to see the contributions of Canada’s Indigenous peoples emphasized in the film. Some really odd contraptions also make an appearance, such as a transportation machine and an early version of the modern computer; and the film highlights the country’s vast resources as well, including the then in-vogue use of uranium. Overall, a charmingly optimistic view of Canadian innovation in the fields of communications, transport and art!” – A. Ohayon 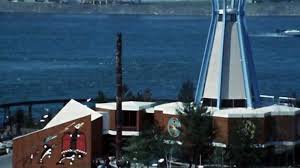 “This documentary highlights the “Indians of Canada” pavilion (as it was called). What I found most fascinating is the poignant mention of the residential school experience; I never would have guessed that this tragic subject was discussed as far back as 1967. We discover that the pavilion was designed by Indigenous people themselves. This nostalgic look at one of the theme pavilions also features an amazing sequence in which we see the entire Expo 67 site.” – A. Ohayon 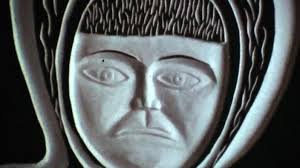 “We follow two Inuit stone carvers from Cape Dorset who come to Montreal to carve soapstone works of art that will be displayed at the Katimavik building (part of the Canadian pavilion). We witness the incredible culture shock experienced by these two men and their young families while they live in Ormstown and commute to the Expo site to carry out their work. One very funny moment is the comment by one of the carvers upon seeing fake igloos built for Expo.” – A. Ohayon 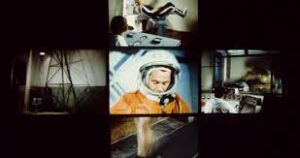 “Scenes for this giant-screen production were shot all over the world with five cameras running simultaneously on a cross-shaped mount. They were then projected on five separate screens in a similar cruciform arrangement. The technique required faultless synchronization among the cameras, the editing equipment and the projectors. The results promised to be spectacular: viewers would have never seen anything like it. More than a million people experienced the film In the Labyrinth / Dans le labyrinthe, shown in two parts in chambers I and III of the huge five-story pavilion (also called The Labyrinth) in Cité du Havre, near the main Expo site. While the other themed pavilions of the Man and His World portion of the fair showed the various means by which humanity had tamed its environment, The Labyrinth offered an interior voyage through which audiences discovered humanity’s conquest of itself.” – A. Ohayon

“Technically, this is not an Expo 67 film, since it was produced for the Man and His World exhibition which subsequently took over the Expo site until 1981. This production was shot on 70mm for multi-screen projection. It’s a mishmash of images, dealing with everything from innovation to poverty to automation. There’s also some choice archival footage of the many, crazy flying contraptions produced in the early 20th century–and some pretty far-out ’60s robots.” – A. Ohayon