The 2020 CFL season is scheduled to be the 63rd season of the Canadian Football League (CFL). It was originally scheduled to begin on June 11, 2020, but the COVID-19 pandemic means the season has been postponed indefinitely.

We know there are lots of football fans here in Edmonton, especially with our Eskimos amazing success over the years. We recently visited the CFL Hall of Fame website and found a fantastic article on the history of the Grey Cup!

We didn’t either!  So, we thought it would be fun to share some articles we found about the CFL and its history…enjoy! 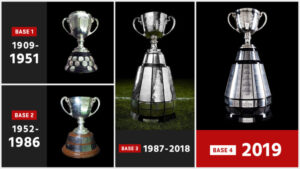 1ST BASE OF THE GREY CUP

The Grey Cup, today a trophy for Canadian professional football supremacy, was originally not a pro award and actually was not intended for football at all!

In 1909 the Grey Cup was contemplated as an award for the amateur senior hockey championship of Canada. However, Sir H. Montagu Allan stepped in and offered a trophy, the Allan Cup, for hockey competition. This made the trophy donated by His Excellency Earl Grey, the Governor General of Canada, and an award for the amateur rugby football championship of Canada.

Having decided to offer the trophy, the Governor General promptly forgot about his promise and the cup was not ready to present to the first senior Dominion Champions, the University of Toronto, in December 1909. Two weeks prior to the championship game, a series of letters was exchanged and a hurried order placed with the silversmiths to produce a sterling silver cup, on a wooden base, total cost: $48.00. Three months later, in March 1910, the Grey Cup was presented to the University of Toronto.

In 1909 all football in Canada was amateur and was governed by the Canadian Rugby Union. All of the Unions, or football leagues, who played under them and were members in good standing, were eligible to compete for the Grey Cup. Teams in Quebec and Ontario were the sole competitors until 1921, when teams from the west also entered the competition. Determining the champion was a very involved process since so many organizations were involved and many played by different rules. An elaborate series of “playdowns” was scheduled which involved the Intercollegiate Union, the Interprovincial Union, the Ontario Union and then, if they decided to travel east for the contest, the champion of the senior western provincial unions.

2ND BASE OF THE GREY CUP

Champions of an organization did not always choose to compete for the trophy. It was common for a University team, especially McGill in Montreal, to determine that the final game interfered with the players’ studies and so they would not compete.

CLICK HERE to visit the CFL Hall of Fame website and read about the 3rd and 4th bases of the Grey Cup and its history!

This is a demo store for testing purposes — no orders shall be fulfilled. Dismiss